NEW YORK TIMES REPORTS: One of the two pilots of the crashed German Wings aircraft left the cockpit before the crash. “The pilot slapped hard against the cockpit door“.

When he could not get back inside, he was trying to break the door reports the New York Times, citing a military official is involved in the voice recorder evaluation.

“The man outside knocks gently on the door but there is no answer,” the man says, according to the newspaper. “

And then he beats stronger against the door, no answer. There is never an answer.”

Why one of the two men left the cockpit, is not yet known, the official continued.

“But it is clear that the other pilot at the end of the flight is alone and the door will not open.” 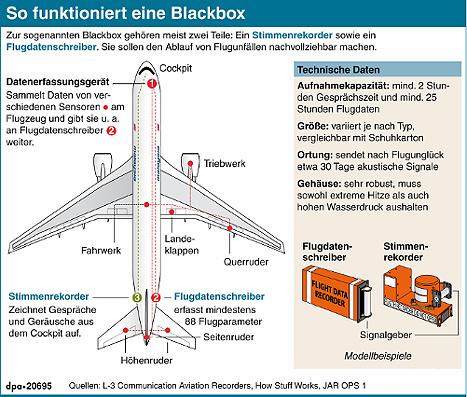 Co-pilot of the German Wings aircraft was employed by the Lufthansa subsidiary since 2013. The pilot had completed 630 hours of flight time up to the crash, confirmed a Lufthansa spokesman in Frankfurt on Thursday a report by the AFP news agency.

He was educated at the civil aviation school of Lufthansa in Bremen.

Since the terrorist attacks of September 2001, the cockpit doors are locked on scheduled flights.  They can only be opened from the inside. In addition, they are reinforced armored.

SECURITY MEASURES: The door has a peephole through which the cockpit crew can see on the outside. Those security measures to deter such as terrorists by the acquisition of the aircraft, flight 4U9525 can be proved fatal. The co-pilot of the crashed in France German Wings machine worked for the airline since September 2013, Lufthansa said a spokeswoman. He has completed 630 hours of flight time. Before hiring the man was at the Pilot School Lufthansa, the parent company of German Wings, trained in Bremen to the pilot.

Lufthansa spokeswoman confirmed FOCUS Online, that there is a code that allows the cockpit door was open from the outside. Nevertheless, the cockpit crew must confirm a video system still inside that opens the door. Whether there is an emergency system, for example, when both pilots are powerless to they would not comment.

Manual of the A320 shows: Door is opened with numerical code from the outside. It is has three electric bolts. In the normal state, the door is locked. If anyone wants enter the flight deck from the outside, the crew can unlock the door manually. The cabin crew are able to open the door with a two to seven digit code programmed by the airline.

Airbus Manual jets of the type A318 / 319/320/321 aircraft crews of Royal Jordanian Airline. There is a mechanical emergency mechanism, the crew in the cockpit can open the door. There is an extra tab that complete the, fails one of the electric bolt. 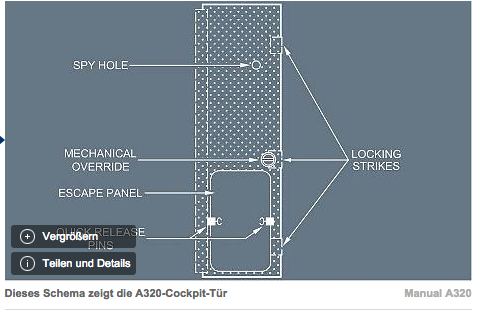 “Every pilot that you ask will say: You can never leave a person not alone in the cockpit. Nobody does that.” Glen Winn, a flight expert at the University of Southern California, said in an interview with the Los Angeles Times.