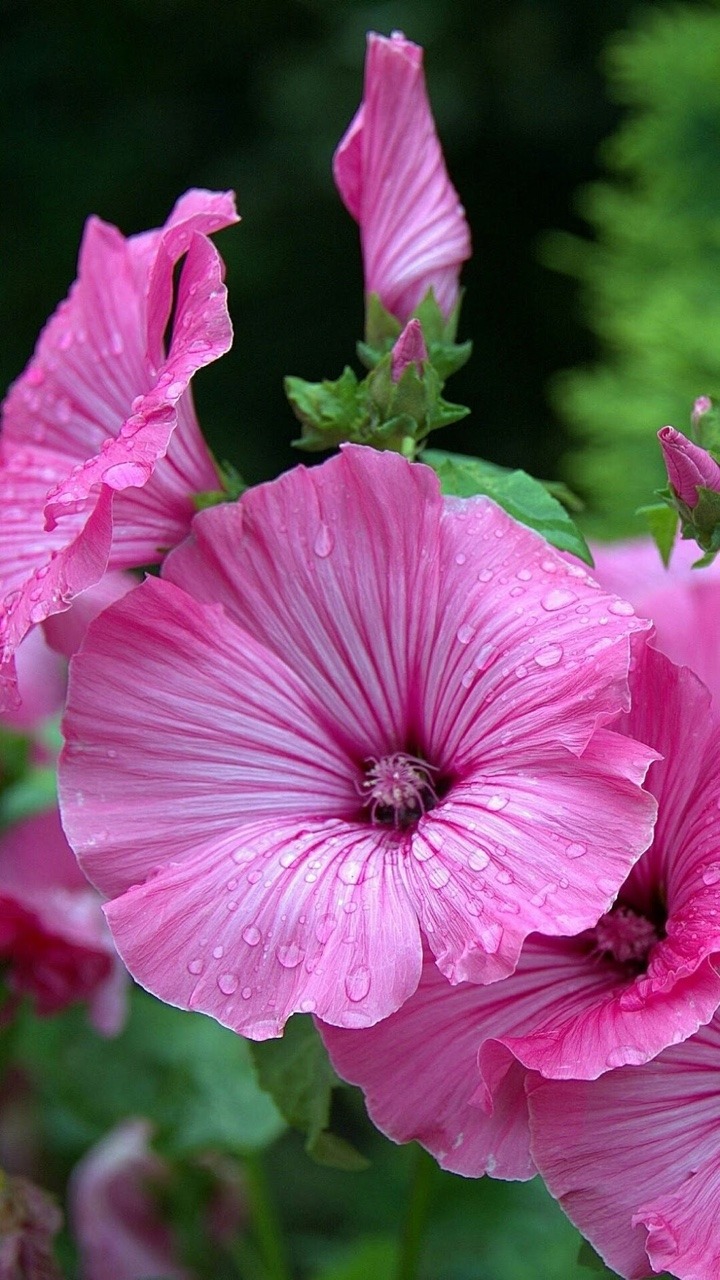 Some physicists believe that they can explain how our universe was formed. If they are right, our cosmos could have come from nothing.

However, recently some physicists and cosmologists began to conduct a discussion on this matter. They note that now we know well the history of the universe and the laws of physics, which explain how it is arranged. Scientists believe that this information will allow us to understand how and why there is space.

In their opinion, the universe, beginning with the Big Bang and ending with our multi-star space that exists today, came from nothing. This should have happened, scientists say, because “nothing” is actually internally unstable.

This idea may seem strange or simply fabulous. But physicists claim that it originates from the two most powerful and successful theories: quantum physics and the general theory of relativity.

How could anything arise from nothing?

To begin with, we should turn to the field of quantum physics. This is a field of physics that studies very small particles: atoms and even smaller objects. Quantum physics is an extremely successful theory, and it has become the foundation for the emergence of most modern electronic gadgets.

Quantum physics tells us that there is no empty space at all. Even the most perfect vacuum is filled with a swaying cloud of particles and antiparticles that emerge from nothing and then turn into nothingness. These so-called “virtual particles” exist for a short time and therefore we can not see them. However, we know that they are due to the effects that they cause.

Let’s now move our view from the smallest objects – such as atoms – to very large pieces – such as galaxies. Our best theory, explaining such great things, is the general theory of relativity, the main achievement of Albert Einstein. This theory explains how space, time and gravity are interrelated.

The general theory of relativity is very different from quantum physics, and until now no one has been able to put them together in a single puzzle. However, some theorists succeeded, using a neatly chosen similarity, to bring these two theories closer to each other in specific problems. For example, this approach was used by Stephen Hawking at Cambridge University when he described black holes.

Physicists have discovered that when quantum theory is applied to space on a small scale, space becomes unstable. Space and time, instead of remaining smooth and continuous, begin to bubble and foam, taking the form of bursting bubbles.

In other words, small bubbles of time and space can be formed spontaneously. “In the quantum world, time and space are unstable,” says astrophysicist Lawrence Maxwell Krauss of the University of Arizona. “So you can create virtual space-time in the same way you form virtual particles.”

Moreover, if these bubbles can occur, you can be sure that they will arise. “In quantum physics, if something is not forbidden, this will necessarily happen with a certain degree of probability,” says Alexander Vilenkin from Tufts University in Massachusetts.

The universe from the bubble

So, not only particles and antiparticles can arise from nothing and turn into nothing: bubbles of space-time can do the same. However, there is a big chasm between an infinitesimal space-time bubble and a huge universe consisting of more than 100 billion galaxies. Really, why would not that bubble just appear in the blink of an eye?

And it turns out, there is a way to make the bubble survive. To do this, we need another trick called space inflation.

Most modern physicists believe that the universe began with the Big Bang. At first, all matter and energy in space were compressed into an incredibly small point, which then began to expand rapidly. The fact that our universe is expanding, scientists learned in the XX century. They saw that all the galaxies are flying apart, which means that once they were close to each other.

According to the inflation model of the universe, immediately after the Big Bang the universe expanded much faster than it is today. This outlandish theory emerged in the 1980s, thanks to Alan Gut of the Massachusetts Institute of Technology, and was refined by the Soviet physicist Andrew Linde, who now works at Stanford University.

The idea of ​​the inflationary model of the universe is that immediately after the Big Bang a small bubble of space expanded at an enormous rate. For an incredibly short period of time, he reached a grain of sand from a point that is smaller in size than the nucleus of an atom. When, in the end, the expansion slowed, the force that caused it was transformed into matter and energy, which fill the present universe.

Despite its seeming oddity, the inflationary model of the universe is not bad with facts. In particular, she explains why the relict radiation – cosmic microwave background radiation, preserved since the time of the Big Bang – is evenly distributed in the sky. If the universe did not expand so quickly, then, most likely, the radiation would be distributed more chaotically than we see today.

The universe is flat, and why this fact is important

Inflation also helps cosmologists determine the geometry of our universe. It turned out that the knowledge of geometry is necessary for understanding how space could arise from nothing.

The general theory of relativity of Albert Einstein says that the space-time in which we live can take three different forms. It can be flat like the surface of a table. It can be curved, like the area of ​​a sphere, and therefore, if you started moving from a certain point, you will necessarily return to it. And finally, it can be turned out like a saddle. So in what form of space-time do we live?

In order to understand that our universe is flat, we need to measure the angles of a giant triangle. And this is the case when the inflationary model of the Universe comes into play. It determines the average size of cold and hot spots in the cosmic microwave background. These spots were measured in 2003, and it was their astronomers who could use them as analogues of the triangle. As a result, we know that the largest scales available to our observations in our universe are flat.

Everything that exists in the universe – from the stars and galaxies to the light that they evoke – must have been formed from something. We already know that particles arise on a quantum level, and therefore we might expect that there is some small thing in the universe. But the formation of all these stars and planets requires a huge amount of energy.

But where did the universe take all this energy from? It sounds, of course, strange, but the energy does not necessarily have to be taken from somewhere. The fact is that every object of our universe has gravity and attracts other objects to itself. And this balances the energy necessary to create the first matter.

It’s a little like the old scales. You can put an arbitrarily heavy object on one scale pan, and the balance will be in balance if there is an object of the same mass at the other end. In the case of the universe, at one end is matter, and “balances” its gravity.

The universe or the multiverse?

Now, the “cooking” of the universe looks pretty simple. Quantum physics tells us that “nothing” is unstable, and therefore the transition from “nothing” to “something” should be practically inevitable. Further, due to inflation, a massive, dense universe can form from a small space-time bubble. As Krauss wrote, “The laws of physics, as we understand them today, admit that our universe was formed from nothing – there was no time, no space, no particles, nothing about what we would know.”

But why then did the Universe form only once? If one bubble has swelled to the size of our universe, why can not other bubbles make it?

Linde offers a simple, but psychedelic response. He believes that the Universes arose and arise continuously, and this process will continue forever.

When the inflation of the universe ends, Linde believes, it still continues to surround the space in which inflation exists. It causes the emergence of an even larger number of universes, and around them more space is formed in which inflation occurs. Once inflation began, and it will continue indefinitely. Linde called it eternal inflation. Our universe can only be a grain of sand on an endless sandy beach.

Other universes can be very different from ours. The neighboring universe can have five spatial dimensions, while ours has only three dimensions – length, width and height. The strength of gravity in it can be 10 times stronger or 1000 times weaker. Or gravity may not be at all. Matter can consist of completely different particles.

Thus, there can be a diversity of universes that does not fit into our consciousness. Linde believes that perpetual inflation is not just an “absolutely free lunch,” but it’s also the only dinner where all the possible dishes are available. 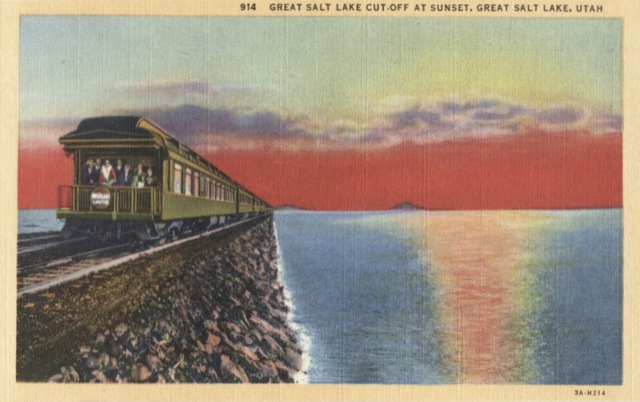 The Slow Death of the Overland Limited

The North Western stopped running the Overland Limited in 1955, leaving it an Omaha-San Francisco train. Union Pacific dropped the train in 1960, leaving it an Espee-only train until that railroad finally dropped it in 1962.

Even though the streamlined City of San Francisco was the route’s premiere train, that train did not run daily until late 1947. So the above 1946 ad for three daily heavyweight trains – the Golden State Limited, Overland Limited and Sunset Limited – made sense for SP. At the time the ad was run, SP had probably already ordered streamlined equipment for the other two trains, but the i would never be fully streamlined.

The above ad from the May, 1953 issue of National Geographic is a little more surprising as by this time the Overland was far from the first-class train it once was. The ad describes the train as the “fastest, non extra fare streamliner between Chicago and San Francisco,” meaning it was faster than the California Zephyr and didn’t charge the extra fare required to ride the City of San Francisco. However, it still wasn’t really a streamliner, as a typical consist in 1946 combined streamlined coaches and sleepers with heavyweight diners, lounges, and sleepers. 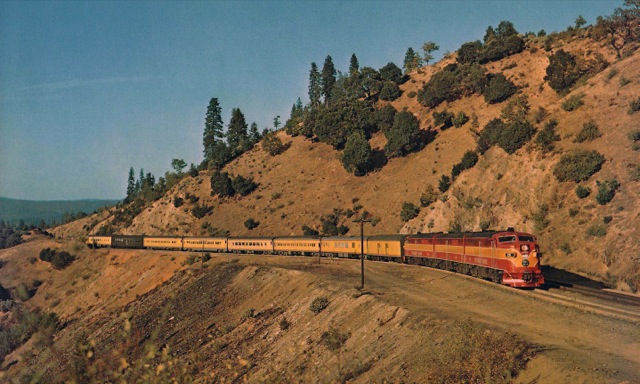 By 1955, the consist of at least some Overlands were fully streamlined, and sometimes even included one of Southern Pacific’s dome cars. But the above 1955 photo shows at least two heavyweight cars in the train; one appears to be a coach and the other a sleeping car or possibly a diner.

In 1960, when the above photo was taken, about half the train was baggage and express cars, meaning SP was mainly using it to move mail and other express freight. The rear cars are obscure, but they are likely streamlined coaches and possibly a streamlined sleeping car.

Continue Reading »» The Slow Death of the Overland Limited 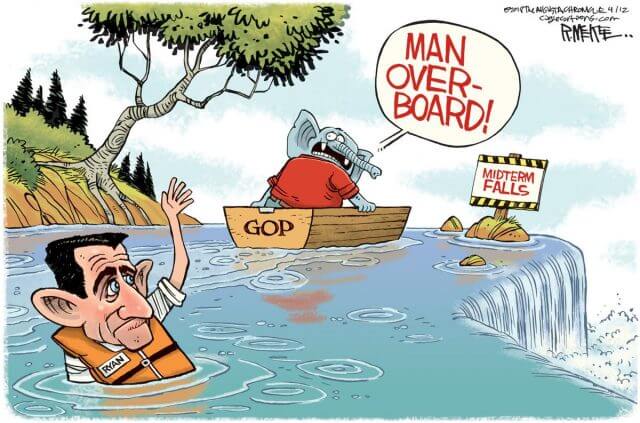